Well this is a bit different! In order to have a game at the club I needed to have an army to go up against an Early Imperial Roman one, I've got plenty of historical armies but not one that works for that( my Early Imperial Roman army is not finished and  based for Impetus/ To the Strongest!) So I figured I'd be able to scrape a stand in army using my pagan Saxons/Picts and Irish , I remembered I'd picked up Boudicca/ Boadicea ( you choose, I don't mind!) A warlord model from Orcs nest which is one of the only bricks and mortar shops left in central London that sells wargames figures and I try and find something to buy when I go in there and the last time I was in there ( some time ago!) This is what I got as a long term build an opposing army for my Romans, I didn't think I would need her quite so soon  !  One chariot is clearly not enough so, as I am a cheapskate, I ordered three mdf chariots from warbase for £9 , I already had some 25mm horses that I'd got to mount my English civil war dragoons on, so I press ganged them in , then I decided three wasn't really enough so I scratch built three more out of balsa, irregular wheels,wire, 1/72 wicker panels and three spare mdf poles left over from my great Italian wars wagons( see Stew, never ever throw anything away!) I also felt the warbase chariots were a little chunky so I wanted to go slightly thinner but I still needed to fit figures based on 1p coins on them. 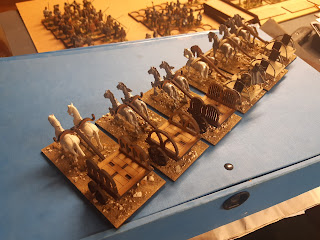 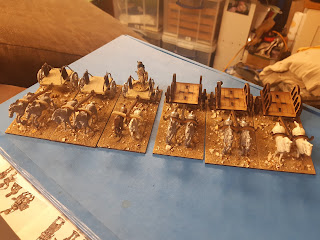 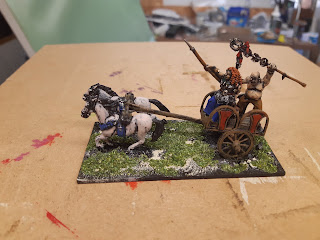 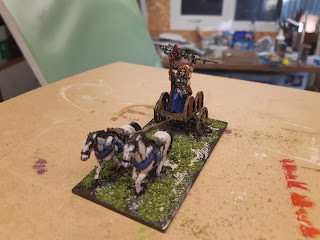 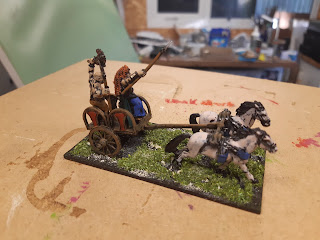 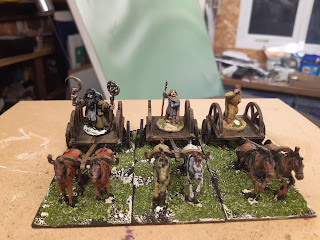 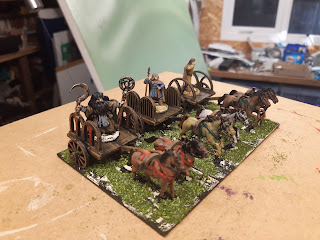 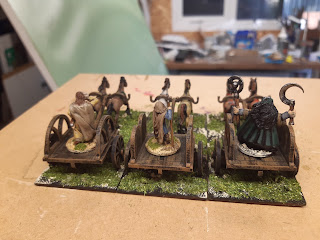 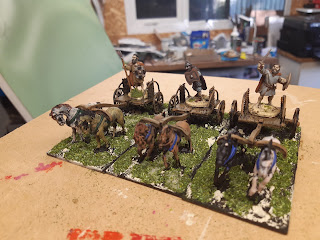 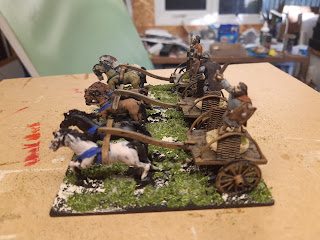 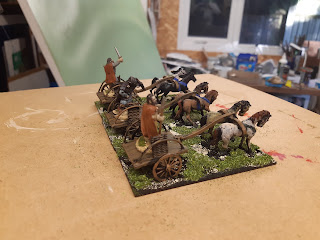 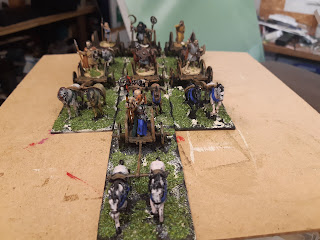 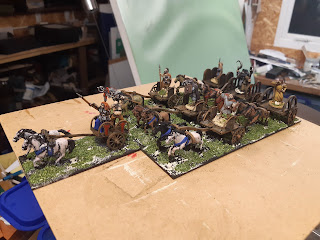 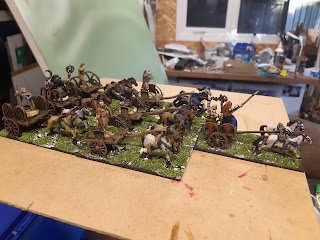 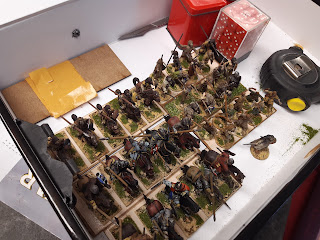 You will I hope, excuse the paint job, essentially in the week leading up to the game my wife got covid which meant no spare time in the evening during the week, she was meant to be taking our daughter to Cambridge to see the Rocky Horror musical for the day on Saturday leaving me with eight clear hours of painting, instead of which I had barely two hours, up till midnight to paint seven chariots including herself and driver and an old GW druid that I rebased onto a penny, he just seems slightly portly! I've chucked some flock at least on their bases after the game which was great fun, fast and brutal, I was in it up until the last go when it all collapsed and I didn't really use my chariots well but, first game great fun and we've agreed on a rematch next month and I've got to join with the cool chariot kids! At least I've managed to squeeze a post into June! The infantry and cavalry are on temporary bases I've got a cunning plan to economically replace them with ancient Britons down the line but for now they'll do! Next up we return to our normal programing ,Napoleonic  probably Austrian ?
All the best Iain