I realised that I missed a northern European church in my collection,I like my Italian wars church but it didn't feel right for the British civil wars or the Wars of the Roses or even the hundred years war and if I wanted to do the battle of Barnet I should have two, one for St Mary the Virgin Monken Hadley and one for St Johns High Barnet.
I'd bought an MDF chapel from TT combat at Salute ( which I have just finished building) in the meantime I came across this plastic church second hand in a railway model shop for not much money and decided to make a couple of adjustments to it and repaint and base it. 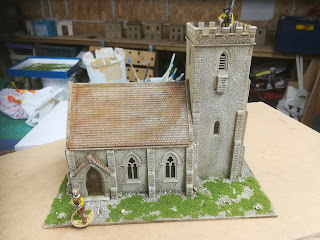 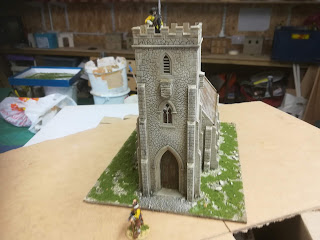 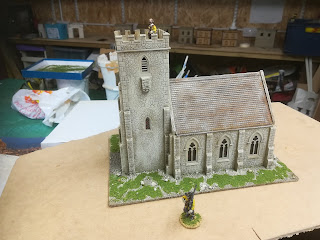 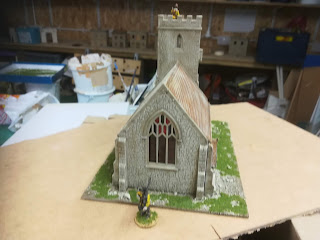 I quite like the size of this church and the door sizes to my mind seem to work pretty well. I changed the level of the tower and put in a new lower platform to enable 28mm figures to look right, I also covered up the clock faces with some left over bits of chimney from my Italian church with a bit of plastic on top.
The figures are British civil war types, Warlord and Essex. It's a bit big for St Mary the Virgin in 1471 and I don't think it had a tower until later in the 15th century but it will do for me and will do service for the British civil war and elsewhere .
There will be some painted figures at some point.
All the best Iain 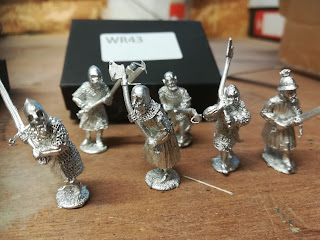 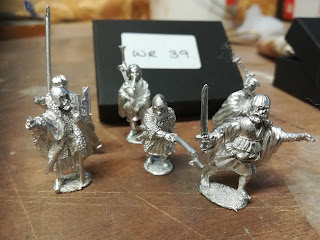 I got these for Father's Day, lucky me!
The start of my Flodden project. I already have Swiss/French pike to stand in with new flags for lowland Scots. The English will be WOTR bill and bow with landsknecht command ( and maybe one or two more period specific English) The rest of the Highlanders will be made up from Perry Ansar,bill and bow/ mercenaries, Agincourt French infantry, Gripping beast Saxon Theigns and maybe their dark age infantry too! That's a lot of plastic!
We also spent Sunday afternoon painting terrain which was great fun!


Nephew no2 came over last night for a game.
I dug out my Italian wars figures,a French force and a Papal/ Spanish force, marked the board up with 150mm/6" squares and read To the strongest rules again.
As it was some time ago that
I had played it and it was against nephew no1 we only used eight units a side.
A senior general,an attached general and an unattached general and then for the French: two units of gendarmes (later knights) two blocks of Swiss pike, two cannons,a unit of crossbow men and a unit of mounted crossbow men.

For the Spanish/Papal side: one unit of later knights,one unit of jinnetts, two cannons, a unit of Romagla pike,a Spanish colonelia,a unit of landsknecht pike and a unit of shot. I tried to keep it simple this time,so no bridge, really just some decorative trees and a hill.
Nephew no 2 went for the Spanish/Papal force,we set up a camp for either side and deployed our troops and went to it.
I advanced my gendarmes,we tried largely ineffectively to fire our cannons the jinnetts charged the crossbow men, failed and got eliminated, one unit of gendarmes took out a cannon and was then charged by the papal knights, another unit of gendarmes hit the Papal knights in the flank a(having just  eliminated the unit of shot)that tussle went on for a long time until just one unit of gendarmes were left.
The  Romagla pike and landsknechts advanced with the colonelia a little way behind, one Swiss unit advanced against the colonelia and the other attacked the landsknecht pike block, crossbow fire ,cannon Swiss pike and a light cavalry flank attack eventually saw off the landsknechts but not before they had damaged the Swiss. Artillery and the Spanish saw off the first pike block ( although they took damage doing it)  The Romagla pike saw off the crossbow men and cannon and was in turn defeated  by the Swiss and light cavalry, the colonelia took out the Swiss and the gendarmes and light cavalry eventually ground down the Spanish to win the game. It was a great see saw game that could have gone either way and I am sure we will be playing it again. The colonelia seems like a really strong unit, I don't know if it is too strong? I'm sure we got things wrong so I will have to revisit and see. 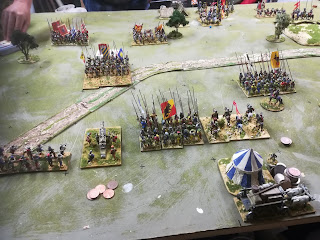 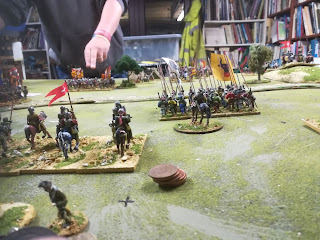 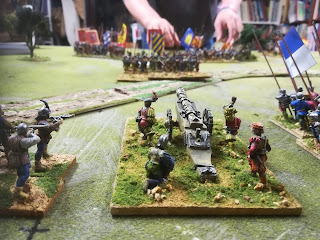 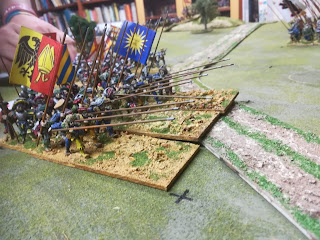 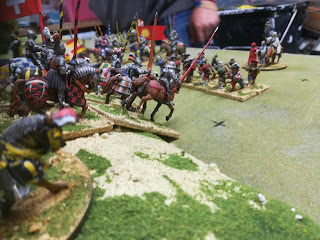 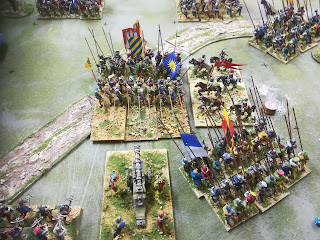 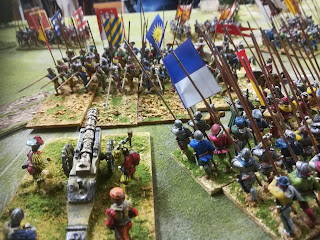 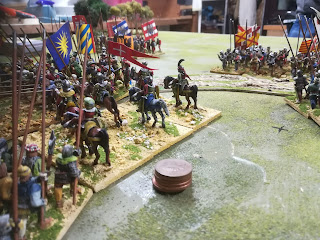 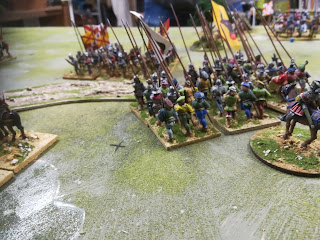 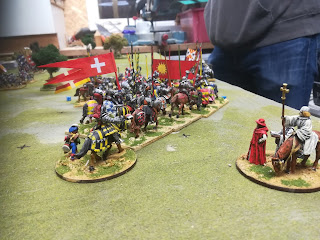 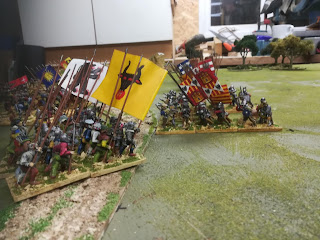 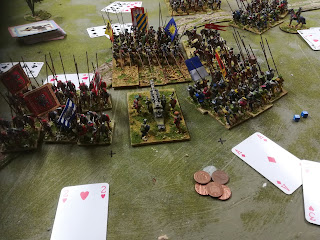 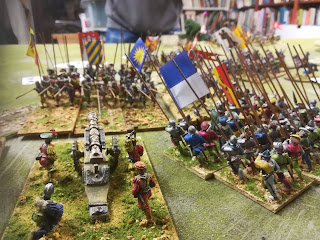 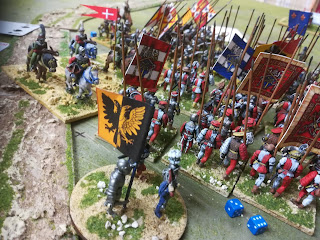 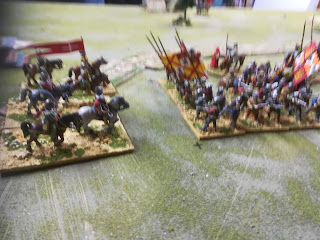 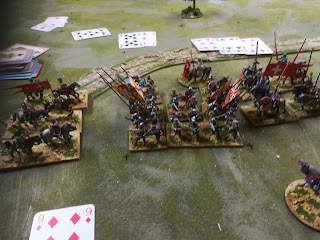 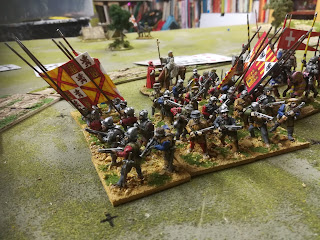 The final photo is of the last stand of the Spanish, I need to make up some ammunition chits and disorder markers,I used my mini dice and pennys but it would be better with something more appropriate. I don't mind the cards on the table as they get cleared away at the end of each go ( we were also especially slovenly I think as it was getting rather late!) A great fun game.
All the best Iain