To the strongest! Fast play,very slowly!

I blame Madaxemans rather splendid after action reports with wonderful graphics and humorous asides in tournaments far and wide.

As a result I have signed up to take part in a To the strongest! Tournament,down the Lee Valley at the Indoor Athletics Center Meridian Way on the 15th of September.

The trouble is I haven't actually played it except with the Rennaisance add on rules.

I also had to have a look at what I have got figure wise that could pass for something medieval,ish, as it's a medieval tournament, my army was going to be late, very late medieval!
I need to get the army list in very soon,so I  put together two possible armies from the late medieval list.
First up is a Swiss army,three pike blocks and a couple of light crossbow.
The other army I think I can do is a Venetian Condatta force with lots of Pete's flags!
My niece's husband Dan came over,he took the Venetians and I took the Swiss.
The Swiss can move as rapidly as mounted infantry and I advanced all three blocks as fast as I could, Dan advanced his troops and essential engulfed me with his much more numerous troops, his Romagla and militia communal pikes managed to hold their own quite happily against my much more expensive Swiss ( when you think they cost six times as much!) With the result that Dan's cavalry were able to attack the Swiss flanks and wear them down.

Great fun game but I think I would have to be much more skillful to use the Swiss, so I will take the Venetians, I can't see I will win anything but at least I'll get some games in a day out! 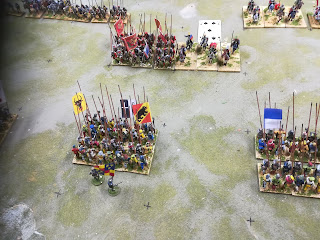 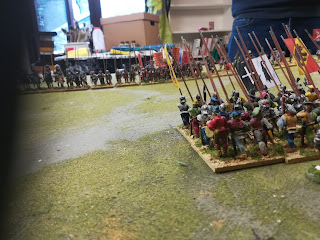 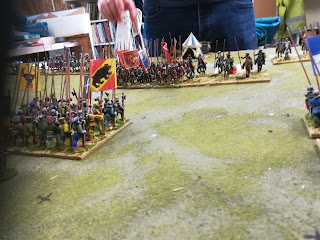 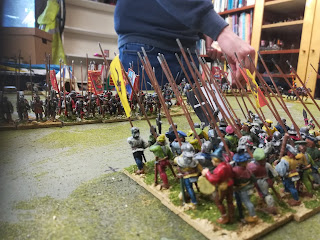 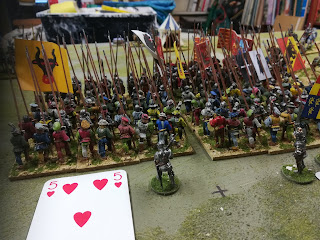 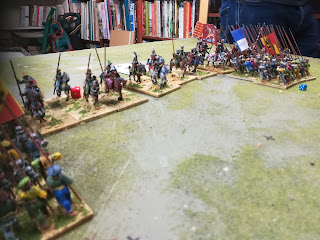 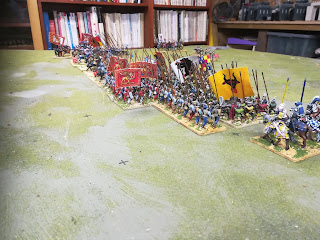 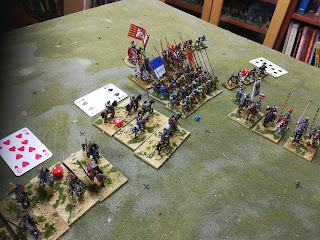 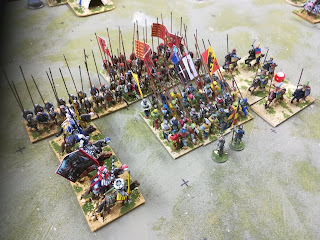 As the title says it's a fast play game that we took a while to play with lots of looking up the rules!
Well at least it all looked nice and it's always good to get the toys on the table. I've got to get my army list off by the end of the day and with a bit of luck I'll get another game in before the tournament.
Next up will be a big pile of terrain,I appear to have got carried away a bit but I'm sure I'll be able to use it, once I've doubled the size of my table maybe!
Best Iain